DAY THREE
He woke painfully, still clothed in night. The boots were a poor substitute for a plump pillow, the stone of the steps an unforgiving mattress. His leg and back muscles spasmed and cramped.

He screamed, puncturing the bubble of silence, as he stretched his legs and pointed his toes to relieve the pain. His scream echoed oddly, the sound stretching and contracting, stopping abruptly.

He reached for the water bottle, optimistically holding the bottle upside down over his mouth and tapping the base. His mouth salivated in receipt of another mint, but he felt dehydrated, sluggish. Levering himself to his feet using the axe handle, he walked around shoeless on the step to stretch out the cramp. The cold slab felt pleasing against the soles of his feet, and he relished the brief respite from the increasing sensory deprivation. He tied the long laces of his boots together and slung them around his neck.

He marked the passing of time by the brightness of his window to the skies, each step taking him further from the light, each hour bringing him closer to freedom.

He marched on at a steady pace, pausing frequently for breaks, mindful of becoming too exhausted without water.

Will my boss even notice I’m not at my desk today?
Will anyone think to stop by my house and check on me?
Should I have waited at the top for someone to find me?

No point second-guessing now. He needed to head down, and out.

He reflected on his own, depressingly normal life. A few longish term girlfriends, but nothing had stuck. No great drama, just hadn’t quite worked out. Livvy, beautiful, sweet Livvy… she could have been the one… pity I wasn’t the only one for her. The usual imbalance of love. His parents had separated when he was young: he hadn’t seen his dad for twenty years. Mom had died a few years back, brain haemorrhage in the supermarket, dropped down dead, like a light switched off. He hadn’t thought about her for a while, and felt some guilt about that, but he’d never been one to dwell on the past. – As for work…

He focused on the future, his future, with a hot little wife, a couple of kids – one boy, one girl, naturally – and a promotion at work to pay for the modern, classy, spacious house they were all going to live in. Something with high ceilings and natural light. Windows. Lots of windows. As dreams go, it wasn’t much, but it was all his, and all he had right now.

He slouched on down the steps.

He had never been one for religion. Never been to church, except for friends’ weddings. Never prayed. Never believed. Never had faith. He’d seen precious little evidence of any Divine power in his life, and the chaos he’d lived through. He was a man of evidence, of things grounded in the physical world that you could see and taste and hold. But he prayed now. He justified it to himself logically – can’t hurt to try – but it went far beyond that. He was losing hope, losing time. Losing his mind.

He needed to reach out to something.

Hands clasped, head bowed, he prayed and prayed, feet taking him automatically, mechanically downwards. The repetition of each movement forward, the clacking of wood on stone, and the all-encompassing dark, had a hypnotic effect. His upper body swayed as the prayer became a chant, while his legs kept on taking him down the endless steps. He prayed and chanted for a long time, descending deeper and deeper. The chant became a rhyme, half-remembered.

In the darkest corners
Of every bedroom wall

In this place where dreams die
And spiders fear to crawl

Something old awakens
The smell seeps through the wall

Time has lost all meaning
His soul will surely fall

He trailed off into silence. The man walked a little more, then stopped, sat, hugged his knees to his chest, rocking slightly.

Sitting there on the step, the dark seeped in through his eyes, his mouth, his ears, through his skin, and was carried along his veins and arteries into every organ, every cell in his body, until all light was gone, and he was one with the dark. 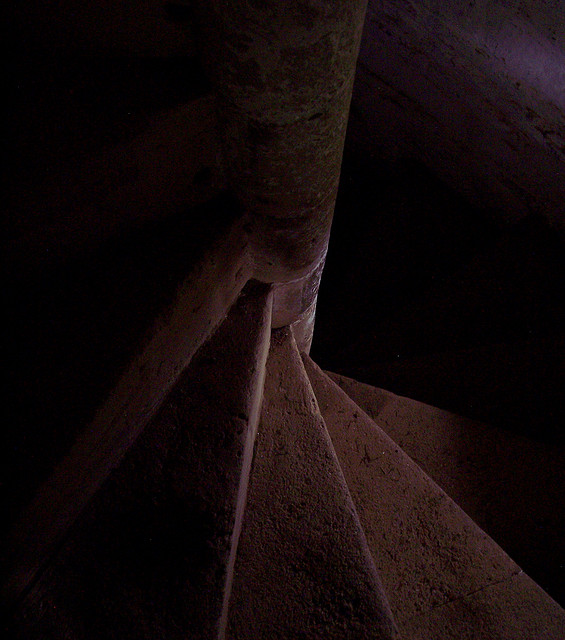