As part of my family’s weekly countdown to seeing The Force Awakens, I’ve been blogging about each episode of Star Wars. This week, it was the turn of Star Wars itself, or A New Hope as revisionists would call it (wrongly 🙂 ).

This is a film that has defined so much of my life, that I grew up with (I still have the original pillow case from my childhood, although sadly not the toys)… it’s impossible to write anything about it objectively. It is not a perfect film, but I would still place it in my favourite “Top 5” of all time (alongside Goodfellas, Godfather Pt 1, Shaun of the Dead, and Finding Nemo seeing as you asked). That list may change a little over time, but Star Wars has been a constant. Hey, even the revised header for my blog (“A Certain Point of View”) is based on a Star Wars quote.

So… what are the best of the best bits for me?

1 – Universe-building
From the opening scene, giving us the scale of the Imperial Star Destroyer as it takes an age to scroll across the screen, to the twin suns on Tattooine, to the Cantina scene in Mos Eisley, to the wonderful names (Grand Moff Tarkin, Death Star, Darth Vader, Wookiee) that stay just the right side of silliness (Porkins excepted), to the scruffy charm of the Millennium Falcon (down to the dice hanging in the cockpit), to the sterile, mechanical interior of the Death Star… this is a rich, immersive, fantasy experience, set a long time ago and far, far away, but utterly recognisable at the same time.

2 – The action
The second half of the film is pretty much action-packed, squeezing in lightsabre fights and space dog-fights that have set the template for the space/fantasy genre.

3 – The music and sound effects
John Williams has given us so many amazing film scores in his time… scoring Jaws or ET alone may have been enough for an ordinary mortal… but his work on Star Wars is incredible. It papers over the cracks in the clunky dialogue, and keeps raising the tension throughout. And all this without the Imperial March yet (which comes in with Empire Strikes Back).

The sound effects deserve mention too. This is all part of the world building, but the thrum of the lightsabre is so embedded in culture now that it’s hard to remember that there was a time before. Plus, some of the sound effects of things as simple as Obi Wan shutting down the tractor beam… in one of my early jobs, whenever I turned the power on in the backroom, I would try and imitate that exact sound effect… I still do now from time to time…

Now, in the interests of at least attempting objectivity, here are the three worst facets of the film (NB – I watched the special edition, and simply skipped over the pointless added Jabba scene… as should you):

1 – Luke
Are we really supposed to be rooting for this whiny farm boy? Give me the piratical charm of Han Solo (who definitely shot first, and would do it again in a heartbeat) anyday! “It just isn’t fair!”… give me strength. Also, why is he more upset about Obi Wan’s death than the death of his adopted parents? Not that he really grieves for either. I’m not getting into that incestuous business of fancying his sister, either. Lucas clearly made up the story as he went along…

2 – Plot holes
These are legion, and tend to be forgiven as “part of its charm”, but as a writer setting out on my path, given numerous pieces of advice about how to structure a story, and checking for logical consistency… it’s tough to swallow this sometimes when you can see how successful some have been without paying any heed to those demands.

– “Only Imperial Stormtroopers are so precise.” Really? There is no evidence of this elsewhere in the film…
– “Execute her immediately”… and yet there Leia is, distinctly not executed, when Luke and Han eventually get to her, some time later…
– Why did the Stormtroopers not simply lob down a grenade into the garbage masher, once they knew all the heroes were down there? They just ignore them, and assume that activating the mashing mechanism will do it. Sloppy.
– “I’ve already tried that, it’s magnetically sealed”… when did this happen? There was a gap of about three seconds between you each diving down…
– Why are there so many platforms and unguarded walkways around the Death Star? I appreciate the Evil Empire may not be big on health and safety, but it still seems needlessly dangerous, especially when the Death Star’s planet-killing death ray fires straight past some workers in a side tunnel, making them cower for their own safety…
– Why do they not separate their waste on the Death Star? Surely some of that metal could have been recycled…
– “They’re coming through!” Er, they’re not. Well, not when this was said anyway.
– If Leia believed that their escape from the Death Star in the Falcon was too easy, and that the Empire let them go, then why fly immediately to the hidden base that she’s been resisting attempts to unveil throughout?
– Is it really possible to fly an X-Wing into a planetary life or death situation without so much as 5 minutes instruction? (And is it appropriate to compare making an all-or-nothing shot on the Death Star with TIE fighters trying to kill you with “bulls-eyeing wamp rats in your T-16″… what is a wamp rat anyway? why do the young people of Tattooine fly around taking potshots at them? poor wamp rats…)

3 – Characterisation
The central characters are based on tropes, rather than rounded people. The wizard, the princess, the pirate… When we first meet each of them, they can be described as “spiky” (Leia), “cocky” (Han), and “whingey” (Luke)… they are the same at the end. Sure, Luke shows some ability with the Force (and I will allow that he is slightly less whingey), and Han shows he’s not just about the money, but would it be too much to ask for a proper character arc? Or even more rounded characters, with flaws and competing motivations? I think this is why Star Wars obsessives like me cling to the “Han Shot First” theme, because this is the only hint we get of any of our central trio having a hint of a darker side, or something “non-linear” about their character. The fact that George Lucas tried to airbrush this out of history in the special edition speaks volumes for the way that he lost the plot after Return of the Jedi…

So, on to Empire Strikes Back next week – many people’s favourite instalment in the franchise. I’ll be casting my critical eye over that in similar fashion. I’d love it if you’d join me 🙂 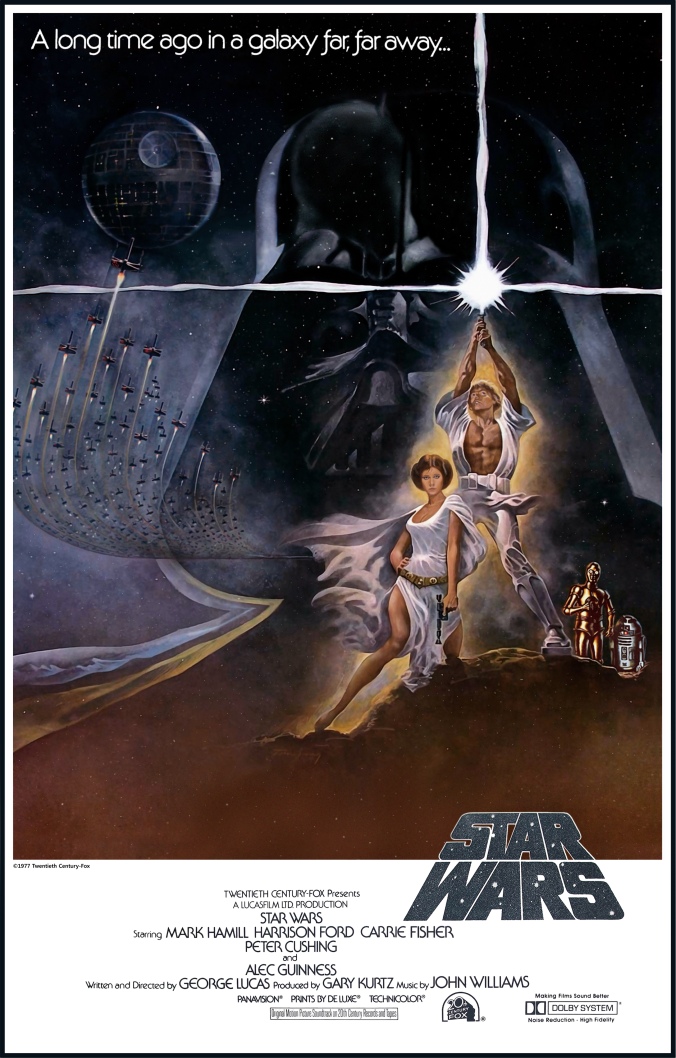