Yesterday was a real rollercoaster of a day.

Having psyched myself up for surgery, following all the advice on what I could and couldn’t eat and drink at the relevant times, I kissed my family goodbye and caught the bus to the hospital… where I sat around for several hours, fully gowned-up in finest hospital-style, before being told that an earlier emergency surgery had over-run, and that my operation would have to be re-scheduled.

It’s one of those annoying annoyances that you can’t even really be annoyed about. As babbitman put it, it’s “someone having a slightly worse time of things that slightly inconveniences you”.

I now await the call – hopefully on Monday – to reschedule. Obviously I’m hoping that it’s not too long a wait. Thank you to everyone for your lovely messages. I will re-read them once the op has actually taken place ❤

As a little postscript, I had gone into the hospital without wallet, keys or phone, anticipating being collected by my wife post-surgery, and not wanting to risk losing my valuables. She was spending the afternoon taking our eldest to a climbing centre with his Beavers group…

The hospital let me call my wife on her mobile after giving me the news, but the only information I managed to get from that short, crackly call was the name of the venue, and that it was “somewhere near the Victoria Centre” (a large shopping centre).

I set off, determined to be as resourceful as Jack Bauer, and find this venue within the hour (before they finished and moved on – no phone, remember). I even had the “24 beeps” in my head. I used my bus pass to get me near the Vic Centre, and hotfooted it across town (for two reasons – 1 – the clock was ticking, and 2- I was wearing “loose fitting hospital wear”, and looked like a hobo. I didn’t want to bump into anyone I knew!)

So anyway, I thought I’d be clever and ask at the information desk at the Vic Centre… they’d never heard of it. Nor had the cleaner. Nor had some random guy walking by with his kid. Dammit! So I turned to a basic GCSE-level knowledge of Central Business Districts, and thought about the areas of the city centre most likely to house a climbing centre… then basically wandered around a bit until I found it!

How on earth did we survive before we had mobile phones, complete with maps of everything and everywhere in the world? Did we just wander around like this all the time, muttering dammit under our breaths??

This was just like me, apart from the gun. Guns kill people 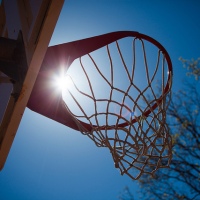